Yesterday, November 6th, marked the first day of my 2013-2014 ski season. A buddy and I got an early start and headed north out of Anchorage to Hatcher’s Pass. We arrived at the parking lot around 9am and proceeded to skin towards Microdot. As we approached, we could see recent avalanche activity on east facing aspects, but none on our destination. The skin up the ridge line was pleasant as we crossed into the rising sunlight about half way up the mountain. As we neared the peak we began to notice a significant crust layer buried a few cm under the new snow layer. Feeling unsure about the stability of the snow pack at this elevation we dug pits on both sides of the ridge. In each pit the layer in question broke free and slid on a weak layer while we were digging the pit. With this information we came to the conclusion that the  safest route down was back the way we had came. We skied the low angle ridge down a few hundred feet until we came to a more stable and shallower snow pack we had observed on our way up. As my buddy kept eyes on, I dropped in for my first turns of the season. They were GLORIOUS! It didn’t matter that they were turns on near bulletproof snow, or that there were exposed rocks everywhere just waiting to put core shots in my skis. No, the 1,000+ vert flew by in a thrilling blur. I stopped at the bottom, clear of any possible avalanche run out, and watched as my ski buddy and his puppy slashed down the run. After we both finished yelling with excitement and high-fiving, we skied the last pitch to the car and headed home. The whole trip was done before noon and I got back to town just in time to race off to work. Although it was a quick trip, the significance of being the first trip of the season was monumental. 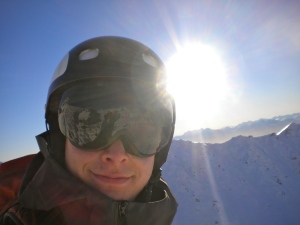 I have also included a map of the area and the up route we used, enjoy!

← Reliving the Past
Getting After It! →